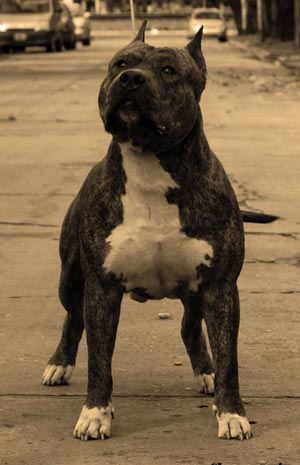 and agility. His determination and indomitable spirit are part of his terrier ancestry. His love of family and reliability with children are part of his considerable charm. The working character of this breed combined with his high intelligence and moderate, powerful athletic structure makes him ideally suited for many dog sports.

He is not a nervous dog, but is quite active, always ready for a bit of fun or a job to do. His size and clean habits make him an excellent house dog. The life expectancy of this breed may be 12 - 16 years with good care.

His appearance is flashy, and he will immediately win the admiration of observers. His well developed musculature shows off his unusual strength.  This is a very people oriented dog, who delights in contact with his family. He has finely developed sense of humor. He needs a very interactive owner, who wants to spend time with his pet; a firm and loving owner who will give him the training required to bring his great abilities to their full potential.

He is not a good choice for a pet who will receive the little or no attention. He is strong, determined and intelligent animal. A bored Amstaff can do great damage to house or yard, so you must be willing to keep up this breed requires. Although not the best for a watch dog because of his generally friendly nature, the Amstaff will protect his family. His courage is proverbial and his loyalty unbreakable.

A little bit of History:


The American Staffordshire Terrier is not a new breed. Although it gained American 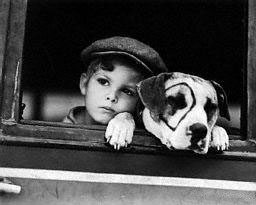 Kennel Club Registration and recognition in 1936, it has been

developed since the early 1800´s as a result of crosses between Bulldogs of that time and game Terriers. One of the early and very famous AKC registered Staffs was “Pete the pup”, (real name Luceny´s Peter) dog star of the original Our Gang comedies of the 1930´s.


Although the early ancestors of this breed came from England, the development of the American Staffordshire Terrier is the story of a truly American breed. This type of dog was instrumental in the success of farmers and settlers who developed this country. They were used for general farm work, hunting wild pigs, bears, and other large game, guarding the homestead, and general companionship.

A number of the early ancestors were also developed for the “sport” of dog fighting. The extraordinary vitality of this breed is a direct result of breeding successful fighting dogs. This now illegal activity is, unfortunately, the more often cited as the early purpose of the dogs rather than the general farm work.